Thank you to all our partners, students, blog readers and everyone else who volunteered their time and energy to the ministry of Ignite. We thank God for each of you!

“Suddenly a great company of the heavenly host appeared with the angel, praising God and saying, ‘Glory to God in the highest, and on earth peace to men on whom his favor rests.'”
Luke 2:13-14

Peace. It was a message the Israelites waited centuries to hear.

After their rebellion in the book of Malachi, God had been quiet for 400 years. No answered prayers. No angelic visitations. No burning bushes, no Presence in the temple, and no blessings from above. They were subject to oppression by the Greeks and the Romans. They were taxed 60-80% of their income, were governed by people who were enemies of their God and had their land stripped away. They were watched wherever they went, were told what they could and could not do, and had to pledge alliance to their new king, Caesar.

Peace wasn’t really a part of their lives.

They knew about it. They had heard stories about how God intervened on behalf of their ancestors, gave them their own land and rest from their enemies. They knew His promises and read about His blessings.

They just weren’t experiencing it themselves.

So when these angels appear on the scene, when the heavens rip open and God’s messengers deliver a promise of joy and glory and peace, the shepherds would have been ecstatic.

God was bringing them peace.

Their Messiah had been born. He would lead the charge against their Roman oppressors, defeat their enemies, give them back their land and reign as their King. All the waiting, all the praying, all the crying out and years of oppression were about to pay off.

The Israelites were overjoyed.

The only problem was, peace didn’t come. Not as they expected.

He didn’t bring them the peace they wanted.

The Israelites wanted a utopia. They wanted paradise. They wanted to be free from oppression and taxation and war. They were praying for a life free from strife and hardship and pain. They wanted the kind of peace that brought them comfort and rest and safety.

They wanted our definition of peace.

Christ gave them the kind of peace that transcends circumstances – that in the midst of turmoil and strife and persecution, we could have a deep, quiet, restful sense that God in in control, and He has our best interests at heart.

And so, my brothers and sisters, as we journey these last few days to the manger, may you be reminded of the true peace Christ gives. May you know that He is in control of your every circumstance. And may you, as you work through your own hardship and turmoil and pain, find that same peace the angels declared 2,000 years ago.

Where do you need to experience peace in your life? 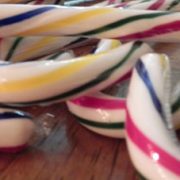 Students, staff, partners, board members and friends from both campuses gathered together to celebrate the end of the semester and to get into the holiday spirit.

Over twenty people showed up to enjoy food, fun, games and fellowship, including some students who were not involved in an Ignite group, but are looking forward to connecting next semester. Each attendee was able to decorate and take home their own Christmas ornament, as a thank you and reminder for their contributions to Ignite this year.

It was a huge success, and we are planning ways to bring students from the two campuses together more often.

To view more pictures of the event, visit our Facebook page.

Prayer is at the foundation of all we do in Ignite. It keeps us in tune with God’s voice, grows our faith and opens doors that only He can open.

Please hold us in your prayers this month for the following:

Students Ignited: Please pray that we see students at Monmouth College and Carl Sandburg College come to know Christ, get ignited with a passion for God, and reach out to their fellow students.

Finances: Ignite is funded primarily through donations from our partners. Please pray that we see growth in our finances in order to increase our ministry to more schools. You can help by making a tax-deductible donation today!

Staff: We are attempting to fundraise a salary to bring President and Visionary Leader, Jason Vana, on full time to push our ministry forward and step through doors God has opened. Please pray for partners in this endeavor.

We appreciate your prayers and look forward to sharing with you how God answered each one!

“But the angel said to them, “Do not be afraid. I bring you good news of great joy that will be for all the people. Today in the town of David a Savior has been born to you; he is Christ the Lord.”
Luke 2:10

Joy. It wasn’t something the shepherds expected to hear about that night.

It was just an ordinary night of doing their ordinary duties. Walk the sheep out. Let them graze. Watch to make sure no animal tried to come and snatch one away. Keep an eye out for any sheep that got lost, or stuck, or fell into a hole. Nothing exciting. Nothing new. Just the same, mundane, lowly task day in and day out.

Joy wasn’t really a part of their lives.

These shepherds were outcasts. Low-lifes. The fact that they were tending their flocks at night meant they were working for someone else. Or shunned. Or ashamed. They were low class, working the job no one wanted to do, spending their nights away from their families, out in the cold, with a bunch of smelly, dumb sheep. Not to mention the oppression they were under from the Roman Empire, coming in, taking 60-80% of everything they owned.

Then seemingly out of no where, while they were just going about a typical night, the heavens ripped open, angels appeared, began to sing, and declared a message they never thought they would hear.

The Messiah has come.

The Israelites waited 400 years for that message. They prayed, cried out, believed, lost faith, came back again, offered sacrifices and held onto the hope that someday, their Messiah would show up and bring them out of Roman oppression.

Finally, the promise God gave to their ancestors was coming to pass – and these shepherds, these nobodies, were a part of that story.

So they packed up their bags, took their sheep home and set out in search of the one the angels declared.

And they found the baby.
And rejoiced over His birth.
And spread word about what was said concerning Him.

But then an interesting thing happened.

He had to grow.

Years of waiting, centuries of crying out, trusting God for salvation from the Romans, countless angelic visitations about the promised Messiah, shepherds and wise men and kings coming from thousands of miles to see this baby…

Only for Him to fade into obscurity for another 30 years.

No Roman overthrow.
No flashy thunderbolts or angelic armies.
No Messiah on a white horse, leading the charge, slaughtering all their enemies.

Their Messiah wasn’t much to be joyful about.

Instead of displaying unlimited power, he was captured by their enemies.
Instead of fighting their Roman oppressors, he challenged their religious leaders.
Instead of being on their side, telling them they were doing everything right, He showed them how far they had wandered from God, and offered them a way back.

I’m sure even these shepherds wondered why the angels came with a message of great joy.

God didn’t show up as they expected. He didn’t do what they wanted. He went pushed against their ideals, lived in obscurity and was a bit of a trouble maker among their religious leaders.

The joy people experienced at His birth was swallowed up in obscurity, accusations, and His eventual death.

Joy didn’t come as they expected.
But it still came.

Because true joy doesn’t come through circumstances, worldly freedom, or having everything you always wanted. True joy comes in unexpected ways, through a life renewed in Him.

And so, my brothers and sisters, as you walk through situations that seem to be joy-less, may you find joy in Him. May you be reminded that joy doesn’t come in having an easy life full of material possessions, but in walking with Christ. And may you, as you journey closer to the birth of our Savior, find joy overflowing again.

Where have you seen joy bubbling up in unexpected places?

“For God so loved the world that he gave his one and only Son, that whoever believes in him shall not perish but have eternal life. For God did not send his Son into the world to condemn the world, but to save the world through him.”
John 3:16-17

We see it in Mary’s choice to trust God and carry his Messiah in spite of the accusations and betrayals.
We see it in Joseph’s choice to stay with Mary, even if he had every right to divorce her.
We see it in Zechariah’s joy at having a son.
We see it in Elizabeth’s exclamation that Mary is blessed, the distance the shepherds and Magi traveled to see this God-child, and the trust both Mary and Joseph placed in God to be the earthly parents of the Messiah.
We even see it in the love we experience from others during this season.

But at the very center of the Christmas story, we see it in the love God has for his people.

The God of all creation, this God who holds the universe in the palm of His hand, the God who parted the Red Sea, held the sun in its place for a full day, and made a 90 year old barren woman pregnant, the God who gave a donkey a voice, the God who defeated armies, named the stars and knows the number of hair strands on each of our heads, did something no one was expecting.

He stepped down from His place in heaven.
Disrobed himself of his power and glory.
Took the form of man.

And dwelt among us.

The Israelites weren’t expecting Him to come as a humble king. They weren’t looking for a man of lowly birth. They didn’t want a man of peace who challenged their traditions, pointed out their errors and showed them a new way of living. They wanted a conqueror. A warrior. A Messiah who would come with a legion of warriors and destroy their Roman oppressors.

Instead, they were given God’s Son.

Born of an unwed, teenage mother.
Born into low-class society.
Born on the floor of a barn, in a town that had no room for him, surrounded by animal crap.

He lived as we live. He felt abandonment and rejection. He endured hurts and pains. His family questioned his potential. His friends abandoned him. He never found a woman to marry. He was childless, sometimes friendless and knew what it meant for no one to understand him. He was scorned, mocked and ridiculed. He was labeled a heretic and blasphemer and sinner. He died too young, didn’t get to realize his own dreams, and lived a life many around him would have considered ordinary.

He experienced the worst the world had to offer.

Lived a life of rejection and pain.

Faced every temptation we have or will ever face.

And he did it for us.

And He proved that love by shedding His glory, stepping out of heaven and being born in a manger.

And so, my brothers and sisters, as we journey towards the manger this year, may you be reminded of the love God has for you. May you see the Christmas story written personally for you. And may you, as you focus on Him more and more this season, find that love begin to transform the way you see yourself.

How has God personally shown His love for you?